Contactless electroreflectance (CER) mapping has been performed on InGaAs capped InAs/GaAs quantum dot (QD) wafers of 2 inch diameter grown by molecular beam epitaxy. The CER spectra have revealed several features related to InAs self-assembled QDs and a quantum well (QW) formed of the InAs wetting layer and the InGaAs cap layer. The particular optical transitions have been identified based on theoretical calculations of the energy levels in the InAs/InGaAs/GaAs wetting layer related step-like QW, performed within the effective mass approximation. The influence of possible uncertainties in cap content or band offsets has also been analysed. The advantages of modulation spectroscopy, namely its absorption-like character and high sensitivity to optical transitions with even very low oscillator strength including those between the excited states, have allowed the energies of all the transitions along the wafer to be followed. The latter has shown that within experimental error the transition energies are independent of the position of the probing spot on the sample. It demonstrates not only a very high uniformity of the dot ensemble but also the wetting layer related QW and hence also the content and thickness of the InGaAs cap.

Electronic transport properties of InAs nanowires are studied systematically. The nanowires are grown by molecular beam epitaxy on a SiOx-covered GaAs wafer, without using foreign catalyst particles. Room-temperature measurements revealed relatively high resistivity and low carrier concentration values, which correlate with the low background doping obtained by our growth method. Transport parameters, such as resistivity, mobility, and carrier concentration, show a relatively large spread that is attributed to variations in surface conditions. For some nanowires the conductivity has a metal-type dependence on temperature, i.e. decreasing with decreasing temperature, while other nanowires show the opposite temperature behavior, i.e. temperature-activated characteristics. An applied gate voltage in a field-effect transistor configuration can switch between the two types of behavior. The effect is explained by the presence of barriers formed by potential fluctuations.

•The superlattice materials were grown with both GaAs-like and InSb-like interface to balance the strain.
•The pixel was isolated by chlorine-based plasma etching together with citric acid-based chemical wet etching.
•The first device with 50% cutoff wavelength of 4.1 μm shows NETD~18 mK from 77 K to 100 K.

•The NETD of the second device with 50% cutoff wavelength at 5.6 μm is 10 mK at 77 K.
We have demonstrated 384 × 288 pixels mid-wavelength infrared focal plane arrays (FPA) using type II InAs/GaSb superlattice (T2SL) photodetectors with pitch of 25 μm. Two p-i-n T2SL samples were grown by molecular beam epitaxy with both GaAs-like and InSb-like interface. The diode chips were realized by pixel isolation with both dry etching and wet etching method, and passivation with SiNx layer. The device one with 50% cutoff wavelength of 4.1 μm shows NETD~18 mK from 77 K to 100 K.of the other device with 50% cutoff wavelength at 5.6 μm is 10 mK at 77 K. Finally, the T2SL FPA shows high quality imaging capability at the temperature ranging from 80 K to 100 K which demonstrates the devices’ good temperature performance.

•BLIP regime starting from 190 K at 3 μm.
•Capacitance as small as 1.3×10-7 F·cm-2, 80 K.
•Good uniformity of diode parameters in 8×8 PD matrix.
P-InAsSbP/n-InAs/n+-InAs single heterostructure photodiode array with linear impurity distribution in the space charge region and “bulk” n-InAs absorbing layer has been fabricated by the LPE method and studied for the first time. Unlike all known InAsSbP/InAs PDs with an abrupt p-n junction the linear impurity distribution PDs potentially suggest lower compared with analogs capacitance and tunneling current. Indeed the developed photodiodes showed good perspectives for use in low temperature pyrometry as low dark current (8×10-6 A/cm2, Ubias=-0.5 V, 164 K) and background limited infrared photodetector (BLIP)  regime starting from 190 K have been demonstrated. High photodiode performance is thought to be due to above peculiarities of the impurity distribution as well as low defect density in P-InAsSbP/n-InAs/n±
-InAssingle heterostructure.

We report a simple and reliable technique to synthesize high-quality In2S3 films on InAs substrates by using thermal sulfurization in a hot-wall tube furnace. X-ray diffraction and energy dispersive X-ray spectroscopy data confirmed that the synthesized films were cubic β-In2S3 or tetragonal β-In2S3, depending on growth conditions. Field emission scanning electron microscopy analysis and Raman spectroscopy showed that the In2S3 films are of remarkable crystal quality. Especially, by optimizing the growth conditions, we have grown an extremely high-quality tetragonal β-In2S3 thin film firmly remained on the InAs substrate, for the first time.

•
We study 2 critical issues (interface abruptness and strain release) in InAs/GaAs NWs.
•
Structural and chemical interface sharpness ≤1.5 nm, better than in previous reports.
•
Simultaneous elastic and plastic relaxation is shown that agrees with FEM simulations.
•
Structural, chemical and strain release investigations were performed by STEM.
•
New MBE self-seeded method whereby InAs is grown by splitting In and As depositions.

The structure, interface abruptness and strain relaxation in InAs/GaAs nanowires grown by molecular beam epitaxy in the Ga self-catalysed mode on (111) Si have been investigated by transmission electron microscopy. The nanowires had the zincblende phase. The InAs/GaAs interface was atomically and chemically sharp with a width around 1.5 nm, i.e. significantly smaller than previously reported values. This was achieved by the consumption of the Ga droplet and formation of a flat top facet of the GaAs followed by the growth of InAs by splitting the depositions of In and As. Both elastic and plastic strain relaxation took place simultaneously. Experimental TEM results about strain relaxation very well agree with linear elasticity theory calculations by the finite element methods. 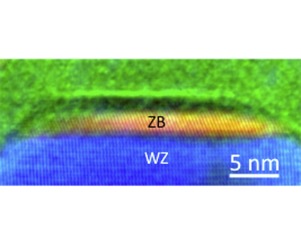 Using angle-resolved photoelectron spectroscopy (ARPES) band structures of indium- and arsenic-terminated InAs(001) surfaces are investigated. These surfaces are highly reconstructed, elementary cells of their lattices contain many atoms in different chemical configurations, and moreover, they are composed of domains having related but different reconstructions. These domain-type surface reconstructions result in the reciprocal spaces containing regions with well-defined

-vector and regions with not-well-defined one. In the ARPES spectra most of the surface related features appear as straight lines in the indeterminate

-vector space. It is shown that, thanks to differences in crystal and surface symmetries, the single photon energy ARPES may be successfully used for classification of surface and bulk bands of electronic states on complex, highly reconstructed surfaces instead of the most often used variable photon energy studies.